Life at Scott Base

Posted on November 2, 2016 by polarchriz

While we are still preparing the last bits of our expedition, we are living at Scott Base on Ross Island (77°51′ S 166°45′ E). This is New Zealand’s permanent presence in Antarctica and is named in honour of Captain Robert “Falcon” Scott, who led the British Discovery Expedition onto the Antarctic Plateau (1901-1904) and the Terra Nova Expedition to the South Pole (1910-1913). The base itself was established in 1958 to support the Trans-Antarctic Expedition with Sir Ed Hillary leading the New Zealand team. 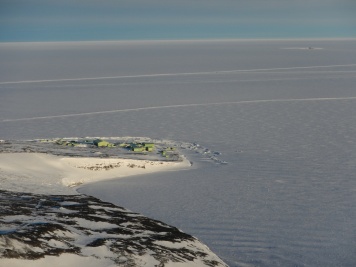 Scott Base from Observation Hill

Today Scott Base accommodates up to 85 people over summer and 10 people over winter. Its beautiful fern-green buildings are linked by all-weather corridors and enable us to develop a space-station feeling. What I like most about the base is that it is powered by three wind turbines since 2009 which significantly reduce its diesel consumption. Indeed, these wind turbines reduce the greenhouse gas production of Scott Base and the adjacent McMurdo Station by 1242 tonnes of carbon dioxide annually !

Apart from that, it was a warm, sunny day with up to -20°C and almost no wind. We are still getting used to the 24 hours of sunlight, but the friendly staff is always pushing us into the right direction. In the morning we learned a lot about the technical aspects of the skidoo’s which we will be using soon for glacier travel out in the field. Also, we gained the crucial skills how to operate a generator and how to keep it running even under rough weather conditions. After lunch, our field trainer James took us out to a training crevasse to update our mountaineering skills (there are a lot of highly useful new pully-systems and I felt a bit prehistoric showing him my simple prusik technique ). Additionally, we are heading out onto the sea-ice tomorrow to practice our camp setup. There is a lot left to learn (radio communication, anchoring tents and solar panels, the usage of the gas stove,…) and rumours of an ice cave to explore. Stay tuned !