Once upon a time a great bunch of people went for the “Payne’s Ford 1000”, a strenuous rock-climbing challenge in Golden Bay, New Zealand. The rules were easy: (1) finish all climbs clean ie no take policy, (2) add up their grades until you reach 1000 points and (3) do it within 24 hours. If you fall, you jump on another climb… In any case, it will be the biggest sending day of your life ! 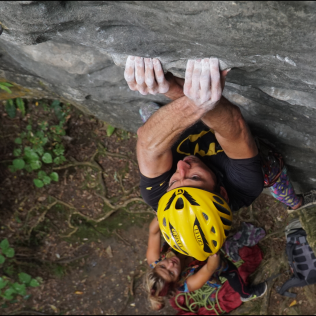 We were sitting at the dinner table on Friday evening and spontaneously decided to give it a go on the next day – “Now you said it Joe”. After a couple of hours sleep, the alarm rang at 11pm and it was time to wake up my team – there was Joe Zonneveld, Pete Hall, Nick Davies, Veronica Gib and Frank Heller – all more than just good friends from the Hangdog camp ground. It was our pack’s anniversary, as we have met three years to the day when Pete asked around camp with his lovely yorkshire accent “do youu guys neeed a klimbn budday ?” It was also a clear night with the full moon shining on the walls – ideal conditions for night climbing and all that was left to do was to have oates as usual (and to get Pete out of bed).

Our midnight snack was as simple as our strategy, start with the first climb in the guidebook and see how we go. Keen as a bean we head out into the night to Creese Wall. Until I realized the full extent of our undertaking, we have sent almost every climb at this crag and Joe’s smile started radiating – “We’ve got this !”

The first milestone, however, to appear in the dead of the night. “Temples of Stone (18)”, a long slab climb leading to delicate crimps up on the main face of Stone Symposium Wall. With my forearms already pumped from an over-motivated start, the climb turned out to be a bit harder than I remembered – as my head-torch unexpectedly turned dark during the run-out towards the last bolt. I found myself in a moment of peace, the full moon was shining on the holds in front of me and the sound of the Takaka river cutting through the silence of the night. I waited for my eyes to get the night-vision going and skipped the bolt – there must be an anchor somewhere up that climb.. Hectic !

We ventured onwards to the Lower Tenuite Wall. Only a few moderate climbs had to be sent here, but the lack of sleep and creeping cold in the early morning hours made the night seem endless. Staying awake while belaying became a real struggle and made me pass out while pulling off our rope. We agreed to a little nap as soon as the first ray of sunlight would warm our numb extremities up and went to Upper Tenuite Wall where we happily anticipated the sunrise… I don’t remember a lot from that morning, except that I fell asleep on a poncho while spooning Joe. All other friends bailed sometime during the night and left us to our destiny. “And then there were two…”

Coffee did the trick to get Pete out of bed

Pete warming up his eyes

Every minute rest is valueable

One group hug and we were ready to go

Lot’s of chalk – mostly for snacking

We woke up a bit disorientated as a group of (surprised) climbers banished us from the the belay ledge. “The early bird gets the worm but the worm that sleeps in doesn’t get eaten.” With approximately 400 points into the 1000, there was still a lot of sending to do and we continued to Slave Wall. Here, members of the UC Climbing Club were already on the two climbs on our list. Their fearless leader Joe “A Man in Tights” Baxter immediately recognized the urgency of our situation and helped with beta, muesli bars and even belaying. What a bro !

Joe and I were passing track 4 and with it we skipped the Globe Wall for the moment, where only hard climbs can be found. On the way to the Fortress we ran again into Frank, Veronica and Nick who supported us with more food, water and good vibes. The climbs here were a lot steeper and more natural protection had to be used – but the good holds were a more than welcome variation to the rough ledges earlier. As the rain came in and prevented us from climbing slabs, we continued at the juggy Little Lost Wall and the over-hanging routes around 1080 gully. A great atmosphere and the only moment were all our several dozens of quick draws were hanging on the wall at the same time.

After another round of coffee and a short anti-rain dance, the clouds were finally clearing – as we suddenly listened up to the sounds of breaking branches. There was Pete, bush-bashing in best Westcoast style towards the Red Wall ! Our pack was complete again and the hunt for points was on. We pushed forward to the Rhinoceros and Happy Hour Walls, where a couple of harder climbs were sent in order to avoid sliding around on the wet Passion slab or even driving to Pohara to reach 1000 points. In the end it was Frank who tallied up and made the call… “Globewall here we come !” Two more friends found us between the rocks, Chris “Far Out” Brownless and Karina “Cowabunga Dude” Brennan, and shared their precious chocolate fudge cookies with us – “Sharing is caring”

Tallying up points during a break 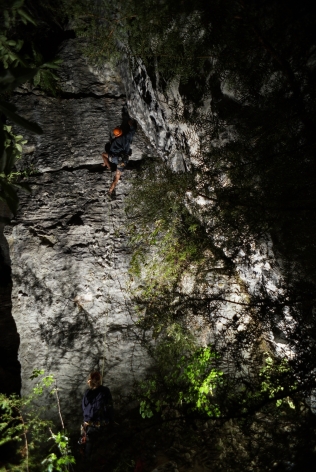 Natural protection is what they say in the guidebook

A fantail checking us out

All the beany goodness for brekky

The sun was setting in a wonderful kumara-orange light as we were on the finishing straight up track 4. Only a few more climbs had to be done, but our arms felt worn out like Pete’s hair bobble and our tender fingertips were pulsating rhythmically to Michael Jackson’s song “They don’t care about us”. Joe, however, kept our spirits high as it was a pleasure to see him flashing “Dirty Harry (19)”, an exciting lay-back crack which must have been even more exciting for him as he climbed past the anchor and traversed into a 25 at the top – Hec…tic… !! We also crushed “Effervescing Elephants (19)” and “Voice of the Beehive (21)” before we finished our challenge simul-climbing at “Super Blond (20)” and “Feisty Red (19)”. Only a few people can empathize with the relief that it was to clip that last anchor ! We repelled down to the team and called it an epic day (and total madness). Overall we sent 59 routes in 22 hours of climbing, used a bag of chalk and ate quite a lot of oates. 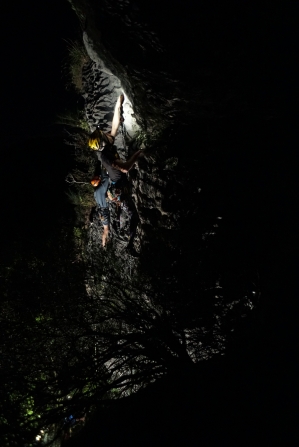 Simul-climbing at our last route 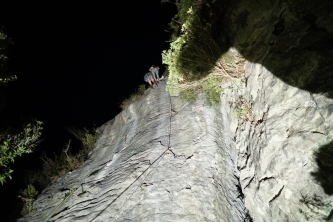 Together at the anchor 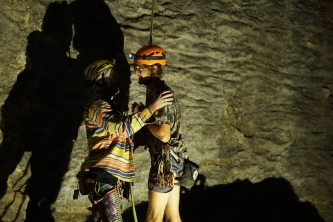 Thanks to y’all who contributed to the biggest sending day of my life – Teamwork makes the dream work. Especially to Joe “Hailstorm” Zonneveld, whose hippie-go-lucky attitude always kept up the good vibes on that day – what a larrikin ! Pete “Thunderstrike” Hall for always setting the bar high, Nick “Flashlight” Davies and fallzonephotography.com for taking epic pictures, Veronica “Gibbon” Gib for a never-ending chocolate supply and Frank “Faithful” Heller for so many buddy checks and belays and for catching Joe tying the wrong knot multiple times and maybe saving his life. Knots… always tie a knot at… 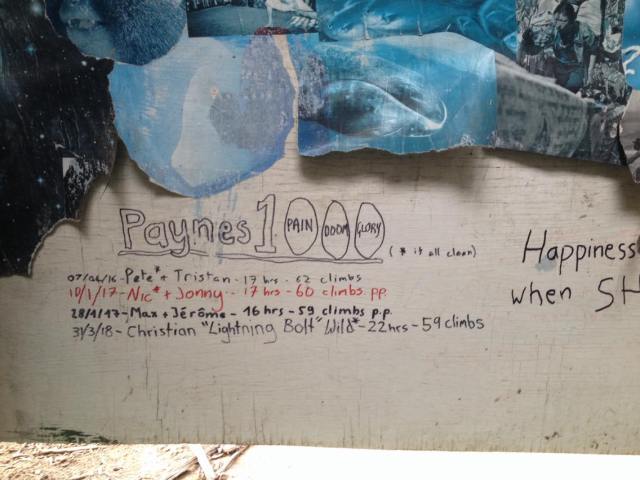