After every summer comes the winter, after every sunset comes the night and after every storm, there comes clear, open skies… Located in the far south of the known world extends an icy continent named Antarctica. It is said to be haven for ice-scientists and other cold-loving creatures. Last week, the “Southerly Beast” sent its cold breath from Antarctica over the Southern Ocean and with it howling winds and heavy snow across the seven kingdoms of New Zealand – a foretaste of what is to come.

Three maesters of the Citadel of Canterbury head out to Mount Gizeh, located at the heart of the Arthur’s pass region. Their mission was not to win the Game of Thrones, nor the quest of the Holy Grail.  Their order was rather to study, learn and climb… Tradition has made it that you know it’s cold outside, when you go outside and it’s cold. So us, the three maesters Daniel, Oliver and myself, tried to find an answer to this legend.

We left our loyal horse “Tiki-van” behind at the bridge over the troubled waters of the Waimakariri river. After a swift 2 hour tramp, we found shelter at the Anti-Crow hut as the rain clouds gave way to the night-sky allowing the stars to shine through. We woke up early to a Tui tweeting a song of ice and fire and continued our journey to the high basins at the head of the Anti Crow River. Waste-deep snow, however, slowed down our progress towards the Echo Col and forced us to establish high camp on an exposed snow-covered ridge, overseeing the Anti-Crow valley.

Snow conditions unfortunately didn’t improve during the night, but a new-moon and clear sky allowed us to catch a glimpse of the unfathomable expanse of the universe. With great enthusiasm for the upcoming winter season and sufficient reasons to say that our saga was a success even without a summit – we turned around and can confirm:

“Brace yourselves. Winter is coming.” 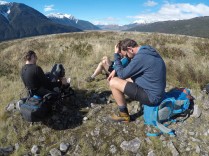 During a short break

The three of us before entering the bush

The view out of the tent 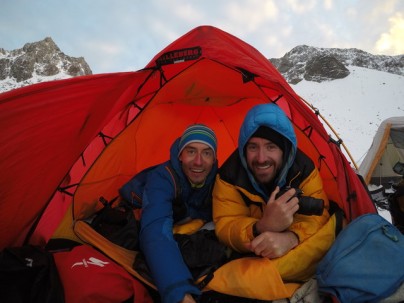 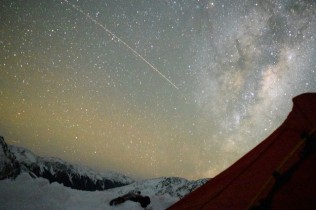