What is the current action being done to prevent the Antarctic from basically melting away?

Since Argentina, Australia, Belgium, Chile, France, Norway, Russia, South Africa, United Kingdom and United States signed the Antarctic Treaty in 1959, polar research stations continue to use diesel generators as their main source of power. In a widespread attempt to curb carbon emissions and pollution, many Antarctic stations have introduced renewable energies to address their steadily growing need for power. Nowadays, the world’s most efficient wind turbines are located in Antarctica and make very good use of its howling winds that were once feared by early explorers. Additionally, solar panels capture the abundance of the sun’s radiation during the austral summer months with its 24 hour of sunlight per day. Belgium’s Princess Elisabeth station is our first zero emission base in Antarctica – running entirely on solar and wind energy and a clever waste-management technique.

What is the environmental impact of people in Antarctica, or do they really only leave footprints in the snow ?

Since the discovery of Antarctica about 200 years ago, the increase of human activities has left its trail in the once pristine environment. Among the environmental impacts, sewage and chemical contamination are the most widespread impact of human activities. Other factors like construction and transport also affect the Antarctic fauna and flora. The introduction of non-indigenous species, even though not widespread, can lead to the extinction of individual populations. Uncontrolled fishery, has also the potential of a complete exhaustion of the Southern Ocean’s fishing grounds and with the coming into force of the Ross Sea Marine Protected Area agreement on 1 December 2017, sustainable fishing, marine protection and science has the potential to be balanced.

Are there organizations to control people’s (environmental) behavior down there?

There are no organisations dedicated only to control the behavior of parties active in Antarctica per se. However, there are organisations such as the Southern Ocean Coalition that are actively participating in Antarctic Treaty Meetings. Its area of focus is the promotion of the full implementation of the Protocol on Environmental Protection. This protocol was adopted to the Antarctic Treaty in 1991 to specifically control the behavior of parties in order to minimize their environmental impact. Observers from the parties also conduct individual and joint inspections of facilities in Antarctica. Inspection reports over the years especially after the adoption of the Protocol recommended clean-up operations of old wastes in Antarctica. While the thorough removal of the burned Comandante Ferraz station after a fire is a prime example of good environmental practice, many other non-operational field stations still remain abandoned. The high costs of removing old waste that is submerged in the ice are currently the main limitation to implement the Environmental Protocol smoothly.

Ephaphrus Mamabolo is also a PhD candidate at Gateway Antarctica and my fellow office mate for the past 3 years. He comes from South Africa and has spent time in Marion Island as the meteorologist for the 2001, 2003 and 2005 expedition teams. During his time in Marion Island, he was passionate about helping sealers tugging and weighing pups. His dream is to work for the South African Antarctic Treaty programme and mentor early career scholars. 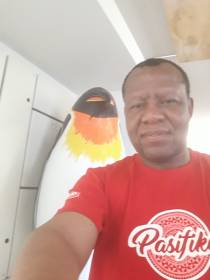