Are there rainbows in Antarctica ?

A halo above our camp at the Priestley Glacier

Today, a lesson in optics. Rainbows are formed when sunlight travels through a drop of liquid water. As a sun-ray enters the drop, its direction is refracted because the medium has changed from air to water. This is similar to sticking a straw in a glas of water – the straw looks kinked. The refracted sun-ray is now travelling through the water drop on a straight line, until it hits the drop’s boundary. Here it is reflected like a snooker ball that is bouncing back from the cushion – the reflection angle is the same as the incidence angle. The now reflected sun-ray then hits the drop’s boundary for a second time and leaves the drop where it is refracted again at the water-air boundary. The important thing is, however, that refraction angles are dependent on wavelength but reflection angles aren’t. For this reason, the initially ‘white’ sun-ray is separated into different colors, causing red light to be refracted less than blue light. This is called dispersion, but what if the water drop is frozen as in Antarctica ? 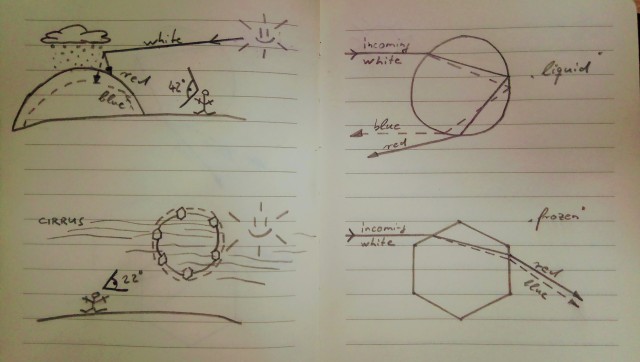 Some pages from my field book

Instead of entering a drop of liquid water, the sun-ray hits a tiny ice crystal located in the upper atmosphere. In fact, these tiny ice crystals are visible as hazy Cirrus clouds hovering  thousands of meters above Antarctica’s surface… peaceful and wispy. As H20 tends to form hexagonal shapes in its solid state, you can think of the ice-crystals as beehive-shaped sticks. The sun-ray is refracted twice when it travels through the ‘beehive’, but is not reflected as within a drop of liquid water. Therefore the initially white sun-ray is less ‘unfolded’ when it leaves the ice-crystal. The resulting spectrum may be visible for our human eyes, but only as a white narrow ring around the sun. If you look closely enough though, you can actually see that the white ring is a bit more red on its inside and blue on its outside.

And here the take home message: rainbows in Antarctica are extremely rare. The last one at the Priestley Glacier must have been several million years ago, when the last raindrops fell in this area. Halos, in turn, occur almost every other day. Can you spot the colors in the picture above ?