Melting mountain glaciers all around our world are poster children for present-day climate change. But how do climate scientists monitor glaciers ? By doing fieldwork !

They go up there after winter to measure how much snow was falling onto the glacier surface (aka accumulation, a positive number), and return after summer to measure how much ice was melting (aka ablation, a negative number). The difference between these two numbers is called mass balance and tells us about the glacier’s health. A negative number corresponds to an overall loss in ice volume (bad), a positive number indicates glacier growth (good). 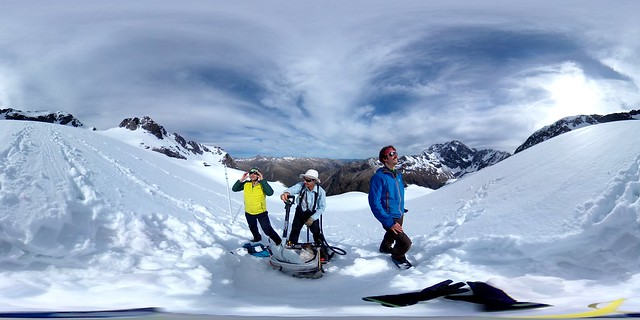 But to calculate these two numbers, we need to know (1) how thick is the snow layer, (2) what is its average density and (3) where did most of the ice melt. This is why we have to carry a lot of heavy science gear up to the glacier and dig holes, probe around and drill into the ice surface to deploy stakes for when we will return after summer.

Left picture: Distribution of snow depth as measured with our probes. The most snow is close to the summit cliffs, where avalanche accumulation plays a major role in feeding the glacier. Right picture: Map of mass balance (colour coded) and location of the Equilibrium Line (where accumulation equals ablation).

We give our measurements to the World Glacier Monitoring Service, who compile a standardized data set for further research on the impact of climate change on glaciers worldwide. Please read this article if you would like further information about the Rolleston Glacier:

…as always, please don’t hesitate to get in touch if you have any questions/comments or concerns. A big thanks to my ol’mate Thomas Langer for editing the 360 footage, and to HITLab for letting me use their camera and ongoing support.