If you take out the team in teamwork, it’s just work. Now who wants that ? Conducting good science in Antarctica, requires a good team. Here is the TARSAN team:

Erin Pettit: As the principle investigator of this project, Erin is coordinating all efforts to realize our science objective to understand ocean circulation and thinning beneath the Thwaites Glacier. Erin will use radar to measure ice thickness and to answer the question if there have been warmer periods in the past. Erin has also shipped a lot of extra chocolate to the Thwaites Glacier to share with her postdoc 🙂 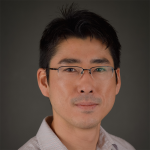 Atsuhiro Muto: As a geophysicist from Temple University, Philadelphia, he really likes to blow things up. He uses explosions to measure the depth of the sea floor underneath the floating ice. Atsu has also been to the pole of inaccessibility and just threw 10 pull ups while we were waiting for our cargo.

Karen Alley: She is interested in how warm ocean water carves channels underneath the floating ice. On the Thwaites Glacier, she will mostly assist Atsu with seismic experiments.

Martin Truffer: He will be drilling boreholes through the floating ice, which will be used to retrieve sediment cores and install through-ice ocean moorings. As a true Swiss, Martin knows where to find an entire wheel of Raclette cheese in Fairbanks, Alaska.

Dale : He is a handy-man and will work with Martin and drill holes through the ice. Apparently he wears a vest filled with tools even when he is sleeping. Dale can repair almost everything, even if it isn’t broken.

Ted Scambos: He is the science coordinator of the International Thwaites Glacier Collaboration and passionate about delivering crucial science outcomes to key stakeholders. He will install ice-ocean sensors in Martin’s boreholes that measure how much warm water there is to melt the ice and how much meltwater flows away in Karen’s channels. He also likes crime series and does an amazing impersonation of Detective Colombo. 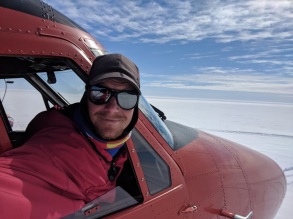 Bruce Wallin: As a software engineer from Boulder, he is working with Ted. His favorite food is peanut butter which he has secretly burried in the science gear. Last season he built the letters M.A.R.R.Y M.E. out of an ice core to propose to his girlfriend – apparently it has worked ! 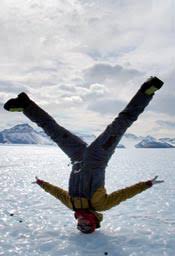 Cece Mortenson: She is a field guide from Canada and big into back country skiing in Roger’s Pass, Revelstoke (secret spot). Cece has worked with Erin before and guided during Girls on Ice – a hands on experience for young females to do science in extraordinary locations. She also can’t wait to do headdstands on the Thwaites Glacier and teach our weekly, on-ice, Yoga class. 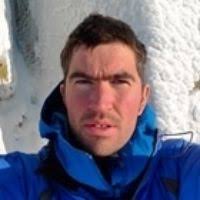 Blair Fyffe: He is a field guide from Scotland and has over-wintered twice in Antarctica. As a keen British climber, he will even bring his hangboard to the deep field to keep his forearms Popeye sized. The two of us not only share a love for rock climbing, but also for black tea with milk.

Doug Fox: Is a science author and has written articles for National Geographic, Nature and Scientific American. Doug generally prefers to write about ice and rock rather than penguins. He is also a brilliant photographer and has worked with indigenous tribes in Papua New Guinea before. He wasn’t eaten there, so he must be pretty tough… 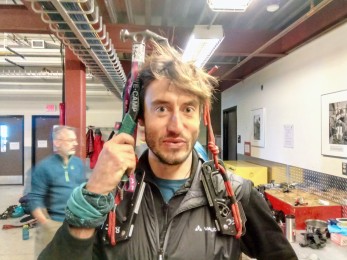 Me : I will work mostly with Erin and the radar systems and will later integrate these field measurements with satellite observations from space. I hope to give everyone a hand and especially learn about hot-water drilling and active seismics. When I’m not doing science, I like to tell dad jokes: “What do you call kids in Antarctica ? Chill-dren !”

1 Response to Introducing the team