With being at a very special location, comes interaction with very special beings. During my time in Antarctica, I get the chance to meet some extraordinary people. Some are other scientist on their way to their field sites, others are staff members which keep the base running. But they all have their individual fascinating stories to tell…

Meet Alessandro Schillaci, a postdoc at the Department of Astronomy, California Institute of Technology, who I met during the check-in for our flight to Antarctica. He was on the way to install a new telescope at Amundsen-Scott South Pole Station to look deeper into the universe as anyone has ever done before. Because the universe is so big, it takes the light of any star quite some time to travel to the Earth. This means that a glimpse to the stars is actually a glimpse into the past. For example, the light from the Sun takes roughly 8 minutes and 20 seconds to reach the Earth. This means that if you look up to the Sun, you see an 8 minutes and 20 seconds older version of what the Sun is actually doing right at this moment. Hard to believe, I know, but even the speed of light is not infinite (186,282 miles per second or 299,792 kilometers per second). So what do telescopes do ?

If you have an improved vision, like from any binocular or telescope, you can look even deeper into space than with your eyes only and thus travel back longer in time. Let’s assume you have a very sweet as telescope, then you could theoretically see the beginning of time in the stars. Alessandro’s new telescope is one of them and so powerful that he can see what has happened right after the Big Bang – when our universe was born 13.8 billion years ago. If you compare this number with the 8 minutes and 20 seconds, you can get a feeling for the unbelievable size of the universe… One thing that Alessandro measures is the distance between two stars and how this distance is growing constantly at a certain rate. He then explained me that this rate is the same in every direction that he can point his telescope – evidence for an ever expanding universe.

With his vast knowledge, Alessandro was more than qualified to answer my highly scientific questions, like: “What’s your favourite chocolate bar ? Milky Way ?!” After a laugh, the ice between us was broken and I asked him for some pick up lines for my next stargazing session… The hole in the non-chocolate version of the Milky Way is called ‘the pipe’ because of its pipe-like shape. I’ve referred to it as the centre of our galaxy in the past, and guess what, Alessandro said I’m almost right ! He pulled out his phone and showed me some of his amazing pictures to point out the exact centre of our galaxy, it is a bit to the right of the pipe: 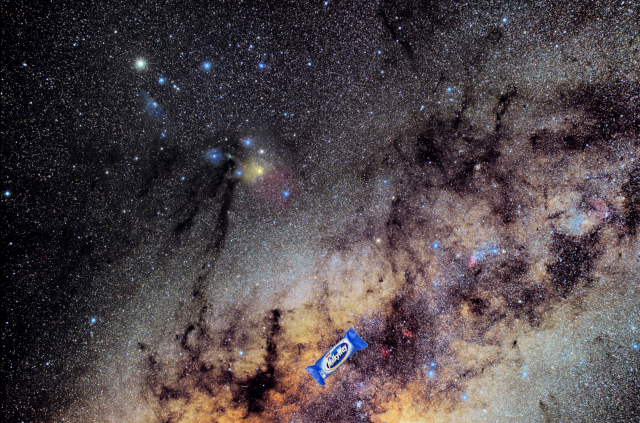 Thanks Alessandro for this chat and especially for making the long wait at the airport seem a lot shorter – but who cares about time, when you know how to time travel ?

Continue reading here, if you have enjoyed this spacetime odyssey: Why is it called Antarctica ?