How does active seismics work? 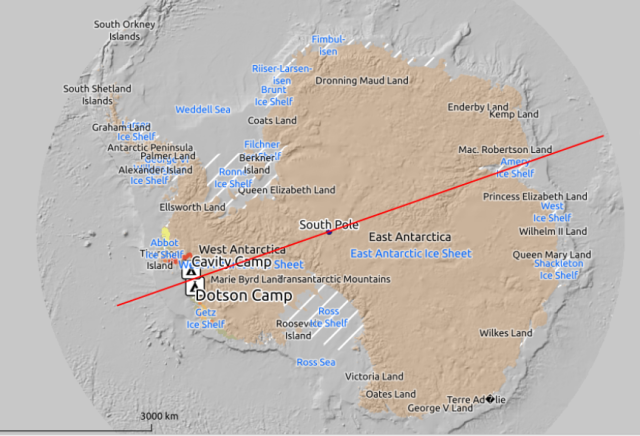 Today we explore the unknown lands of Antarctica. While we can map Antarctica’s surface with satellites, our knowledge of what lies beneath the ice is very limited. Radar can be used to estimate what Antarctica’s bedrock looks like and has revealed surprising results. For example, the South Pole’s surface elevation is 2835 m (9333 ft) and it sits on about 3000 m of ice. This means, that the weight of the overlaying ice is pushing the bedrock below sea level. So let’s cut a transect through Antarctica and have a closer look!

Our transect starts far away in the open ocean. Here, research vessels have been used in the past to map the ocean floor with sonar. These measurements show that the deep seabed goes down to below -4000 m beneath the ocean surface. As our transect reaches West Antarctica’s continental shelf, the ocean floor jumps up rapidly to -500 m and remains at this depth until we reach the West Antarctic Ice Sheet. The ice itself is heavy, and pushes the ocean floor back down. It is here where the ice is getting thicker towards the South Pole and the bedrock is sloping inland causing the West Antarctic Ice Sheet to be inherently unstable. Closer to the South Pole, the Transantarctic Mountains cause the bedrock to rise again which acts stabilizing. So where is the problem?

It is the areas where we can’t map the ocean floor from research vessels or airborne radar. This is because sea ice prevents ships to access certain areas, or because the ocean surface is covered by a 400 m thick floating ice shelf as for our two field sites. In these areas, active seismics is the only way to accurately map the ocean floor and pinpoint canyons in the continental shelf that allow warm ocean waters to access the West Antarctic Ice Sheet and cause rapid melting. What is active seismics? Now this will blow your mind – it means to use dynamite on the ice-shelves surface.

The seismic signals of the explosion travel through the ice shelf, are then reflected by the ice base and can be captured again at the surface. But some of the seismic signal even travels through the ocean waters underneath the ice, are then reflected by the ocean floor and captured by the same geophones on the surface. Atsu, as our seismologist, is then using these measurements to map the ocean floor underneath the ice shelf.

These maps then help us to answer fundamental questions of ocean circulation in this critical region. When did the ice thin to a point that our Dotson Camp site became ungrounded? This thinning would have made Bear Peninsula to a Bear Island, which allowed warm ocean waters to access parts of the ice shelf that is wasn’t able to erode before. Today we have made our first successful seismic experiment, and we are about to find out when!

2 Responses to How does active seismics work?