Who would have thought that the Himalayas are right next to the Pacific Ocean ?! New Zealand’s East Coast can offer you an Everest-like experience, with views of the mighty blue glow of the Pacific…

Te-Ao-Whekere is the second highest peak of the Seaward Kaikōuras. The route follows happily up the Happy Valley Stream from Puhi-puhi Station – until Oli and I decide to take one of our beloved “shortcuts” and climb up a steep scree slope,  crossing a spur falling from point 1910m. We swiftly follow the ridge line around the large basin east of the summit until some dense vegetation slows us down and forces us onto our knees. After one hour of bashing around, we finally top out of the bush and reach the snow. We continue along the icy ridge, until strong gusts and diminishing sunlight cause us to camp for the night. Our exposed campsite with the Kaikōura Peninsula beneath and hauling winds throughout the night made us feel like being on Everest. Digging trenches for the tent, melting ice for water and our breath shining in the light of our head torches completed the Himalaya feeling.

We woke up to a mighty blue sky, the wind had dropped in the early morning hours, and we found ideal ice climbing conditions ahead. “Let’s face it – all these sagas finally pay off !” We venture along the steepening ridge, with our crampons scrunching in the snow.  With every step and every stroke with the ice axes, the summit comes closer. An exposed and technically difficult section requires  all our focus. On its top, we finally find the time to fill our eyes with the beauty surrounding us. “Maybe we should call this our summit !”

We decided to turn around, as the upcoming section was too steep for us to free-solo safely. On our way back to the tent, we took a second “shortcut” and climbed Surveyor Peak (2365m). Our detour was rewarded with stunning views of Manakau (2608m) and the majestic Tapuae-o-Uenuku (2885m) of the Inland Kaikōuras. A landscape that reminded us much of Antarctica – where Oli and I were sitting together in a tent on 14 November 2016, when a 7.8-magnitude earthquake struck this area. Along 110km of coastline, vertical movement ranged from subsidence of 2.5m to uplift of 6.5m. There was also a small tsunami and tens of thousands of landslides. During our descent back to Puhi-Puhi Station, we saw many of the faults and cracks that this earthquake has left.

It was a fantastic weekend, but also a farewell trip for Oli – who will leave NZ soon. I’m more than thankful for his comradeship over the past couple of years and for being my PhD supervisor who became a close friend. Take care “Oscar Mike !” Cheers for access Puhi Peaks Station, Kaikouras’ Wilderness (and for the tow at the end of the day). 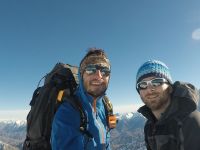 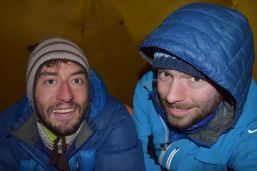 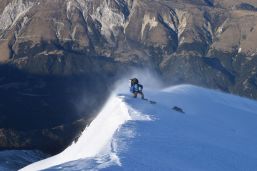 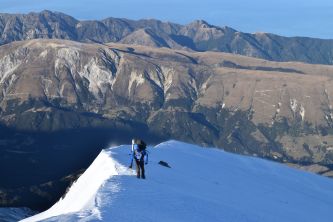